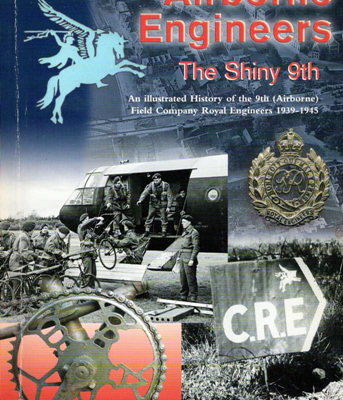 ‘The Shiny 9th’ or ‘Airborne Engineers’, the story of the 9th (Airborne) Field Company RE 1939-1945’ by Patrick Pronk, which originally came out in 2001, will be reprinted and available by the end of March. 110 Pages (16.5cm x 23cm), 68 b&w illustrations, softcover edition. Except for a few minor changes, a revised nominal roll and two better quality pictures, it is the same as the 2001 edition . For those who have the original edition a free pdf will be available later which will cover the revised nominal roll. (FB Sigmond) ‘For No Apparent Reason’, the shooting of Captain Brian Brownscombe GM, RAMC, by Bob Gerritsen will again be available at the same time. The original booklet was published in 2000. 32 Pages (16,5 x 23cm), 18 b&w illustrations, softcover edition.

For No Apparent Reason’
The Shooting of Captain Brian Brownscombe GM, R.A.M.C.’ would never have been written but for member Bob Gerritsen’s inquisitive nature. After reading Chris van Roekel’s book ‘Verscheurde Horizon’ (Tom Horizon) and ‘Red Berets and Red Crosses’ by Niall Cherry, Bob was left struggling with the question of the circumstances surrounding Captain Brownscombe’s death. Accurate research has produced a book about a minor fact in the wider context of the Battle of Arnhem, but indeed a fact which has to do with one of the few war crimes perpetrated during the battle. I have read Bob’s book with interest and admiration. The book describes Brownscombe’s life in concise chapters. His medical studies and entry into service with the Royal Army Medical Corps lead to us meeting him again, first with the 2nd Battalion The South Staffordshire Regiment in Sicily and later as Regimental Medical Officer at Arnhem. He was captured and set to work in Arnhem Municipal Hospital, treating both German and British casualties. Brownscombe was talking to a Danish Waffen SS soldier at the hospital entrance when he was shot dead by a German SS sergeant. Both SS men belonged to the SS-Kriegsberichter-Abteilung 5, the unit possibly responsible for the propaganda broadcasts near the Hartenstein using a loudspeaker truck. The book looks at the lives of the Dane HelwigLarsen and the murderer Lerche, and closes -via a number of eyewitness accounts from other British officers – with Lerche’ s trial. His reasons for murdering Brownscombe were never made entirely clear at the trial. Was Lerche simply drunk, was he working to orders, or did he think Brownscombe was attempting to escape? Despite a few unfortunate irregularities in the text it 1s an extremely readable book and one which can be recommended. It comprises 32 pages and is published by member Robert Sigmond. It can be purchased at Meijer & Siegers in Oosterbeek. (Okko Luursema)