The 1st Parachute Battalion’s move, South, over the railway line at Oosterbeek in the early hours of Monday, 18th September 1944, has always been somewhat of a mystery.

This is because there is no mention of how the Battalion achieved this crossing from their War Diary.

A recent article has put forward a ‘theory’ that a crossing was achieved at a previously little known area of the railway line about 1,200 metres to the West of the Oosterbeek Railway Station, at grid: 689796, on the 1944 Map.

In the spirit of further discussion and perhaps, friendly debate, I offer my research on the subject.

The Battalion’s glider lift was split in two:

NOTE: Glider C/N: 462 came down in the North Sea. Allocated to HQ-Company, on board were C/Sgt. Cook, Pte’s. Harper and Rogers, who were rescued, but the two Jeeps were lost. [1]

This left the Battalion with only six Jeeps.

This would carry 4 x jeeps, 5 x trailers & 12 men of the Bn MT Platoon with the reserve ammo & stores.

NOTE: At least one of these gliders came down short, in the Netherlands, but still joined up with the Battalion. At least one glider load did not. That of C/Sgt. Seal, ‘R’ Company, was retained at the Divisional HQ area in Oosterbeek. [2]

Attached to the Battalion were the following:

This meant they only had three x 6-pounders with a Jeep each, and one Jeep with the Troop HQ, as the second Jeep was put back on to the 2nd Lift. [3b]

Due to serious crash landings of the Hamilcar gliders carrying the 17-pounders, there was a re-organisation on the ground and only 1 x 17-pounder accompanied the 1st Battalion. With the heavy casualties of ‘D’ Troop it was essential that there was some reorganisation. “Lt Ryall was told to go with Sergeant Rams and his 17 pdr, and follow the 1st Para Battalion into Arnhem”. [4]

NOTE: There were no Jeeps available for the above four sub-units.

The mission of the 1st Parachute Battalion was to wait at the D.Z, in reserve, until the other two Parachute Battalion’s had moved off and if all was well to then move along a Northerly route into Arnhem and take up a defensive position on the Northern outskirts of the town. 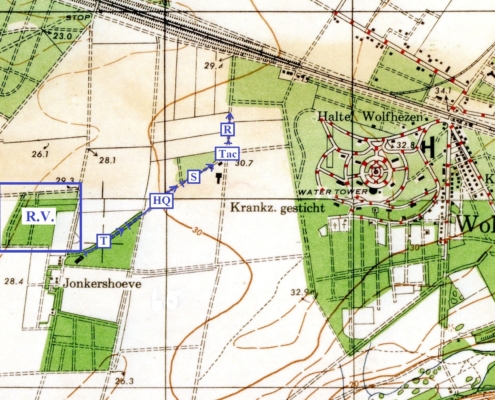 The Battalion was ordered to move off at 15.40 hours.

This map shows how spread out a Parachute Battalion can be when moving in a column. ‘R’ Company was in the lead, with the C.O’s Tactical HQ just behind, then ‘S’ Company, followed by Bn Main HQ, HQ-Company (with the Support-Weapons Group, minus detachments), and attachments to the Bn, with ‘T’ Company bringing up the rear. Altogether the column would be approx. 1,000 metres long.

In an effort to try and clarify the various possibilities, this article will look at the known facts, and then see if it is possible to make an educated estimate of what occurred between 03.00 hours and 04.30 hours, on that Monday, 18th September 1944. 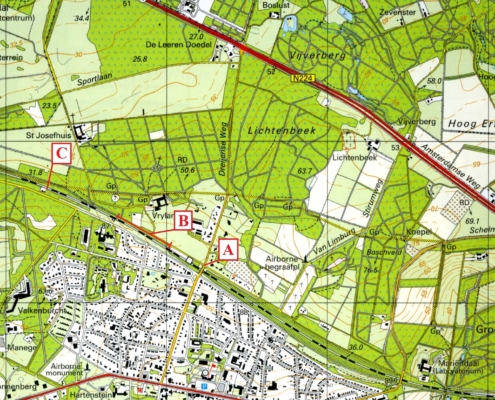 The modern map shows the possible crossing places that have been mentioned since 1944.

[A] = The Oosterbeek Railway Station Crossing. 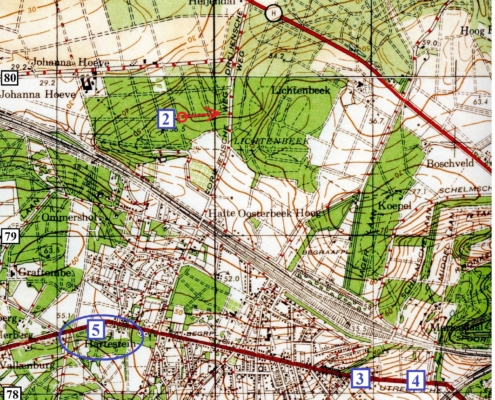 This means they covered 2 ½ to 3 km’s in 1 ½ hours, at night with enemy in the vicinity. Comparing this to the rest of their actions and movements, this is quite an accomplishment, but how did they do it.

So, where did they cross the railway line, and what route did they take after that?

1). Lt-Col. Dobie, from his personal diary: “I decided to by-pass to the South, by this time it was dark. Having no wireless to ‘Tim’ [Major J. Timothy, O.C: ‘R’ Company], I sent John B [Major J.C. Bune, Battalion 2 i/c] to try and get him out, he was away a long time. Eventually he came back with Toby M [Captain. P.G.A. Mansfield, 2 i/c, ‘R’ Company], who informed me they had 50% casualties and were trying to evacuate them. Just then some Boche came down our track and Chris’s [Major C. Perrin-Brown, O.C: ‘T’ Company] lot opened up – they stopped them, but had six casualties. I decided to pull out and leave guides for Tim’s remnants – left Sgt Floyd [Intelligence Section Sergeant].

Nightmare journey in the dark across tracks in thick woods, transport in great difficulties – no wireless working at all – out of touch with Gerald [Brigadier G. Lathbury, Comd 1 Para Bde]. Twice bumped enemy in the dark, they seem to be everywhere. About then we managed to reach the main road (‘Tiger’) and turned east to make our way round to our objective. Ron [Major R. Stark, O.C: ‘S’ Company] was leading and we had just left R [Major R. Stark], when he ran into heavy cross-fire from both sides of the road, there was no more by-passing, so we attacked by the left – sniping commenced from behind us.”

Morning saw us re-crossing the railway lines, still surrounded by trees. ‘S’ Company was ahead of us and my platoon was not intact. Some had strayed during the night. My Platoon Commander, Lieutenant Eric Davies, was also astray. We finally reached the tarmac road and turned east again, towards Arnhem. We were on the outskirts of Oosterbeek.

3). L/Cpl. Geoffrey Charles ‘Geoff’ Stanners. No 1 Section, 16th Parachute Field Ambulance, R.A.M.C. attached to the 1st Parachute Battalion, did a taped interview for Niall Cherry, which he used for his book ‘Red Berets & Red Crosses’. See page 104: ‘The party Geoff Stanners was with crossed the railway by the bridge at Oosterbeek Station, walked down Stationsweg in a southerly direction (it was now the morning of the 18th) and turned left at a junction with a sign for Arnheim (the German spelling). Slow progress was made that day toward Arnhem including getting mixed up with element of the 3rd Battalion.’

4). Pte. Henry McAnelly, 2” Mortarman, 5 Platoon, ‘S’ Company: “At the Leeren Doedel were 4 German tanks……….After an hour fighting ……… we were ordered to march immediately in southern direction to support the 2nd Bn at the Arnhem bridge…………. we went through the woods of Johannahoeve where we met fierce opposition. Finally we reached Oosterbeek. We sent out a recce but we never saw the men back. This recce was led by Sgt Kelly. In Wolfheze a 16/17 year old boy offered his services (Karl Doorman). Col Dobie accepted this. They studied the map to find the fastest route to our destination………. So we reached the Railway Bridge at Oosterbeek Hoog railway station, then we went on in the direction of Arnhem.” [5]

5). By far the most detailed account comes from former L/Cpl. ‘Reg’ Curtis. Mortar Platoon, who revisited the Arnhem Battlefield area many times to retrace his steps: Ref Photo 3A. On the North side approaching Oosterbeek Station, this bridge was destroyed in 1940. The Germans built a wooden bridge with 7”/2”. On the right by notice board was a damaged house, with a Panther tank hidden by tobacco plants in the back garden, the German tank was silent – so were we!! 1st Para met the Dutch Underground movement on the wood bridge; they were silent men – in ‘mufti’ – but well armed, they were wearing an armband with the word ORANGE in black letters 2 3/4” on an orange colour background. 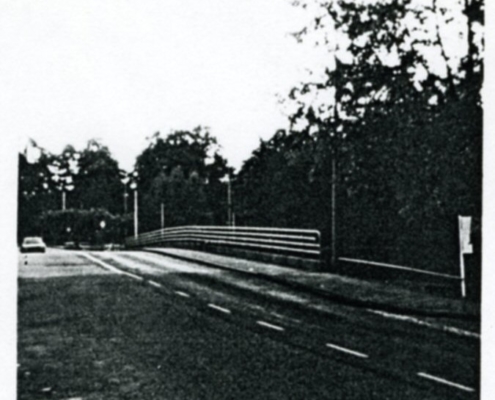 Ref Photo 4A. After leaving DREIJENSEWEG on the North side of wooden bridge, I entered the house of No 38, Stationsweg, OOSTERBEEK, 200 yards from the Station – marked (X). Also at the HUISE SVACO where a Dutch couple Mr & Mrs CARTENS lived. Heer T.H. MOOIJ who lived in Stationsweg in 1944, found himself looking down the barrel of a 38 revolver when he opened his door to a Para Officer. The houses in the picture survived [the] 1944 battle, and are still inhabited. 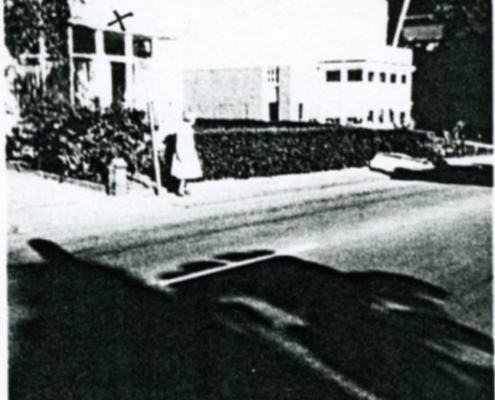 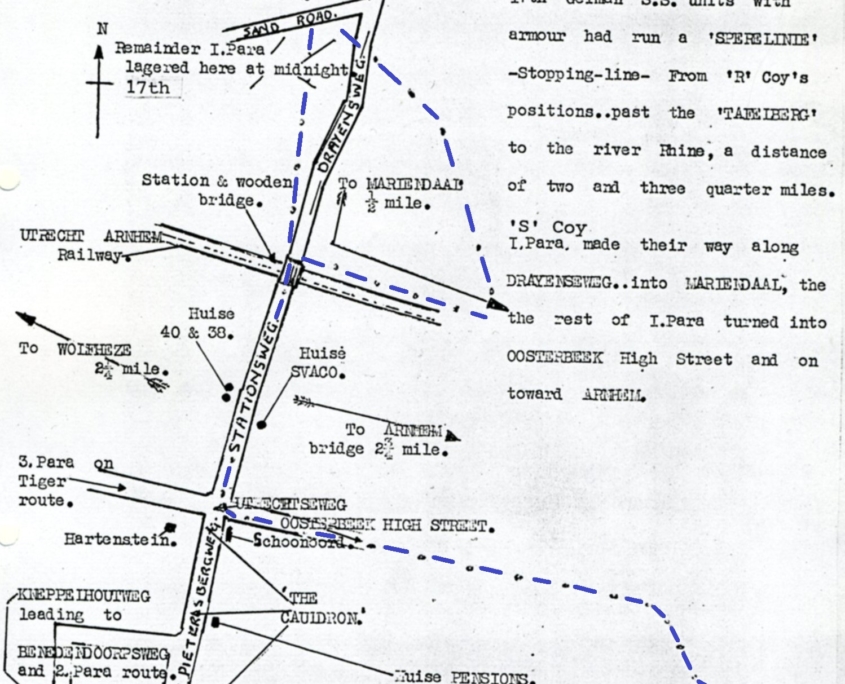 Along with his account and notes he produced a sketch map of the 1st Parachute Battalion’s movements, 17th – 18th September 1944. I have highlighted the route, that he says the Battalion took, in blue. Some of this is inaccurate, but he is quite definite about crossing the bridge, and then moving down Stationsweg to the Utrtechtseweg. It is very probable that ‘S’ Company did not move North of the railway (as indicated by the sketch map), but did follow the Parallelweg, on the left flank of the Battalion, as they advanced.

NOTE: It is evident from this that the 3rd Parachute Battalion cannot have had an Observation Posts or Standing Patrols up by the crossroads of the Utrechtseweg/Stationsweg on the night of the 17th/18th September, or they would have ‘linked up’ with the 1st Battalion. It would appear that ‘B’ Company were up around the Hartenstein, with Battalion Main to the West of them, and ‘A’ Company bringing up the rear, just to the East of the De Herberg cross-roads, all of the Battalion being either side  of the Utrechtseweg.

Is there any other evidence of the 1st Battalion’s movements? Yes, but it comes from a rather unexpected source – the II S.S. Panzer Korps Headquarters map, produced by Colonel Theodor Boeree. 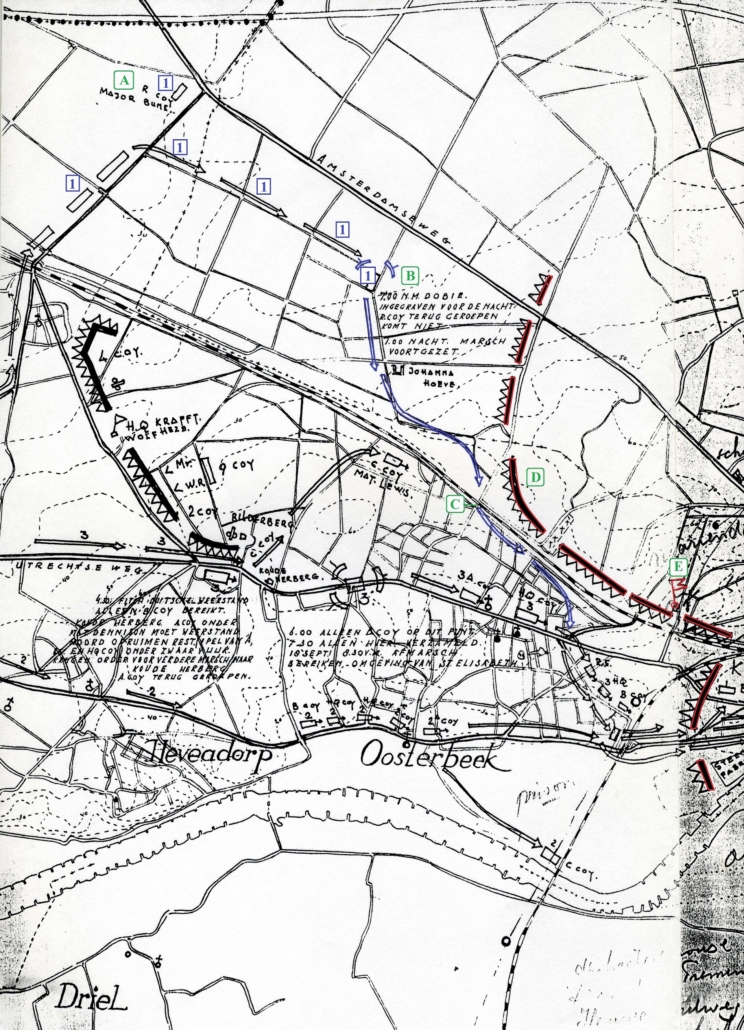 [1] the 1st Parachute Battalion and its movements.

[A] Where ‘R’ Coy were engaged with elements of the 9th S.S. Panzer Division and where the Germans have marked where Major. Bune was probably killed.

[B] The overnight position for the 1st Para Bn, and where the German document states: ‘Dug in for the night R-Coy recalled, does not continue night march’.

[D] The German blocking line is shown as not encompassing the junction of the Dreijenseweg and the railway bridge. 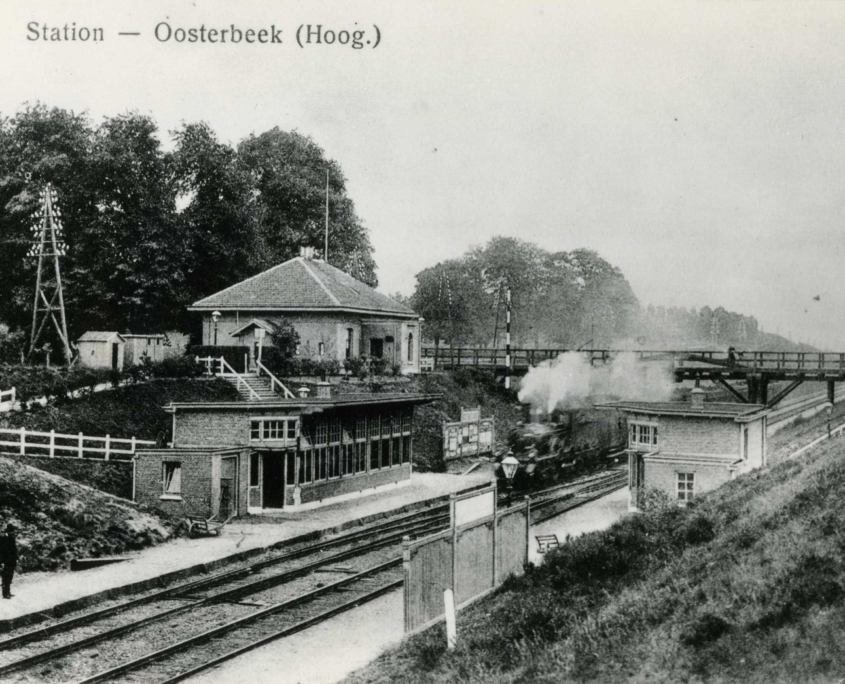 2). The bridge across the railway line from Arnhem to Utrecht at Oosterbeek Hoog Station.

A Bailey Bridge was put in place in September 1945, followed by the present bridge in 1949. 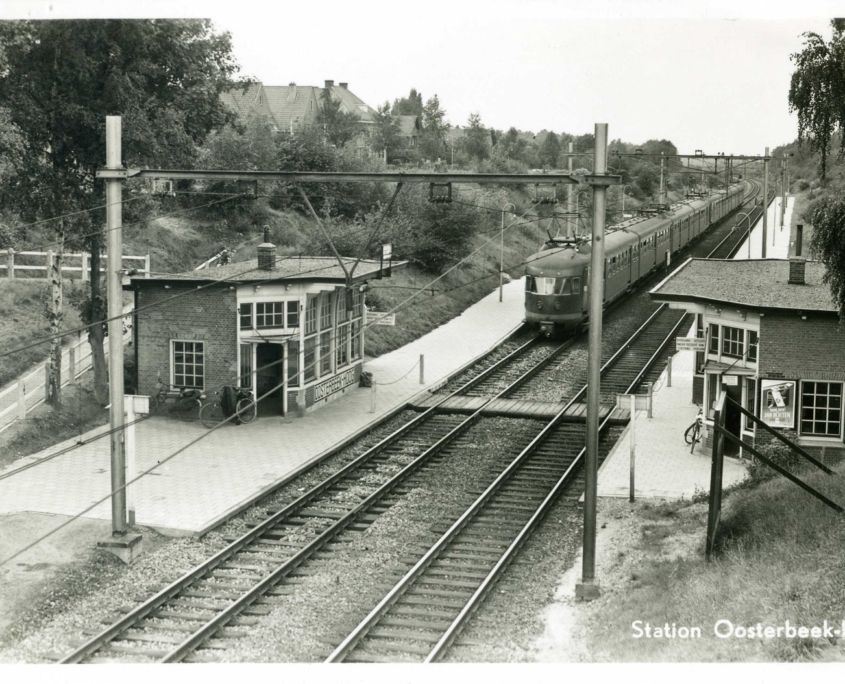 It seems clear that the Main Body of the 1st Parachute Battalion crossed the railway line by the bridge at the Oosterbeek Hoog Station at approximately 04.00 hours, with ‘S’ Company probably turning immediately left onto the Parallelweg, and the main part of the battalion heading down the Stationsweg and then turning left onto the Utrechtseweg. It is probable that bringing up the rear, and to protect the ‘flank’ of the battalion, ‘T’ Company crossed the railway line just to the West of the bridge. ‘S’ Company would appear to have re-joined the battalion on the Utrechtseweg near the junction of Noorderweg, and then took up the lead again, when they were fired on in the area of the Mariendaal at 04.30 hours.

I cannot find any evidence to show any elements of the 1st Parachute Battalion crossed the line at the Railway Workers access crossing point.