With sadness, sharing the news of the recent passing on the 25th February 2022 of Retired US Air Force Lt. Colonel Richard Ford, 99 years young. 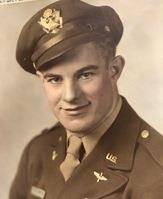 During WWII, 2nd Lt. Richard Ford was a pilot who joined the 310th squadron of the 315th Troop Carrier Group based at Spanhoe airfield in England, shortly after D-Day. Mr. Ford flew C-47 cargo planes, bringing supplies to Patton’s army from England and twice dropping paratroopers into The Netherlands during Operation Market Garden.

On his second combat mission dropping Polish troops into Driel, the C-47 Richard flew with 1st Lt. Oliver “OJ” Smith was badly damaged by ground fire and flak, wounding two crew members and forcing an emergency landing in Eindhoven. On the 75th anniversary of that day, he described it as the worst day of his life: he thought he was going to die and never see his daughter or his wife again. However, Mr. Ford credited OJ’s flying skills and maneuvering with saving their lives. Once safely on the ground, the remaining crew members decided to tour Eindhoven and realized they were the first American pilots to arrive since the town’s liberation. The Eindhoven mayor found them and invited them to his apartment for a social drink.

On a personal note, I called Mr. Ford in May 2020. He knew the purpose of the call, and when asked if he might have known my grandfather, he quietly shared “Dear, I did not know your grandfather. The men were there to serve a purpose. You did not want to make friends or get too close to others, as that person could die. It was not a place to make memories and it was an awful War.”

Mr. Ford enjoyed a good full life, surrounded by family. He was likely the last living member of the 315th Troop Carrier Group.

Thank you for your service and may you rest in peace.