SOCIETY OF FRIENDS OF THE AIRBORNE MUSEUM

At long last, we are able to send you our first News-Letter which we hope will adequately inform you of the Society’s progress, as well as new acquisitions and interesting events concerning the Airborne Museum.

We would also like to thank you for showing such patience during the rather long wait before receiving much sign of life from the Society.

Including your membership, the Society now has some 192 members, many of whom come from Great Britain.

Visitors to the Museum

We are very pleased to inform you that great interest is being shown in the Airborne Museum – in some ways our Museum – and that up until the 31st October of this year, 68.612 visitors have been to the Museum. Quite a splendid number!

Acquisitions in the Museum

Since last September, the following items have been received by the Board of the Foundation; suffice to say that some of the acquisitions are quite spectacular:

We are very proud to have the uniform of Squadron Leader R.F.S. Cleaver, DSO, DFC, RMWO, Commander of the 570 RAF Squadron, which made daily flights tot Arnhem (in Stirlings) during the Battle of Arnhem.

Her Majesty Queen Wilhelmina made Squadron Leader R.F.S. Cleaver a Knight of the “Militaire Willemsorder” 4th Class due to his heroic actions; notwithstanding the fact that on the 12th September, 1944, this RAF pilot was given command of the Squadron and had only made five flights with a Stirling, on the 17th September he flew to Arnhem with a Horsa glider behind his plane, whilst on the 19th, 21st and 23rd September, he dropped food and supplies in the area of Arnhem. On the last day, his plane was shot down and crashed. Miraculously he survived and managed, via Brussels, to escape to England, where he arrived on the 25th September. He then, once again, took over the command of his Squadron. These historic flights are all recorded in his logbook and the Museum is now in possession of a photostat copy of the logbook, generously given to the Museum by Mrs. Cleaver.

Another spectacular acquisition is the original, hand-written war diary of Lieutenant Colonel R. Payton-Reid, DSO., who commanded the 7th (Galloway) Battalion The Kings Own Scottish Borderers during the Battele of Arnhem.

This diary was presented to the Museum by Mrs. Nan Payton-Reid, Lt. Col. Payton-Reid’s widow.

The Museum is also now in possession of its first “set of medals” belonging to an Arnhem veteran. They belong to George Gatland, Regimental Sergeant Major of the 11th Battalion The Parachute Regiment who, as Company Sergeant Major, fought in September 1944. At the last Memorial Service on the 21st September, these medals, earned with “blood, sweat and tears”, were presented to the Museum to be kept in safety and appreciation.

The Museum’s Library has been considerably extended after a most generous financial donation, whilst various smaller interns have also been added tot the collection; these are exhibited in the show-case of new acquisitions in the large Reception Room.

From the 29th November to the 25th January, 1981, there will be a Photo Exhibition in the Airborne Museum. This Exhibition has been made possible with the cooperation of Photo Aviation Service, and in this way special attention is given to the great and historical planes, some still flying in Europe, which were so essential during and after the Second World War.

“Veterans of Today” consists of sixty black and white, as well as coulour, photographs and slide-boxes of veteran planes, such as the Boeing B 17, North American B 25 “Mitchell”, Douglas A 26 “Invader”, North American T-6.”Harvard”, Douglas DC-3.”Dakota”, Avro Lancaster, Supermarine Spitfire, Hawker Hurricane, The Havilland “Tiger Moth”, Fairey “Firefly” and the Junker Ju 52.

Friends of the Society have free admittance to this Exhibition on showing their membership card.

The provisional Committee has pleasure in announcing the First General Meeting in January, 1981. A date has not yet been decided on as, first and foremost, we would like to have an idea of how many members will be present.

The Friends abroad will probably be unable to attend, if only due to pure destance. However, we will send you any further details as soon as they are known. We hope to show an authentic film concerning the Landing in 1944 at the same time as the General Meeting.

We hope that the first News-Letter will be of interest. May we mention that, should you have any suggestions which might improve or assist the Society and its aims, that you write and let them be known.

SOCIETY OF FRIENDS OF THE AIRBORNE MUSEUM OOSTERBEEK. 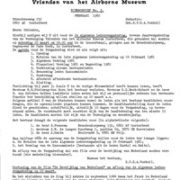