Dear Friends,
We have pleasure in inviting you to the 2nd Annual General Membership Meeting of the Society of Friends of the Airborne Museum, to be held on Saturday, 20th March, at 2 p.m., in the Concert-Hall on the Benedendorpsweg, opposite the Old Church, in Oosterbeek.
The Agenda for the Meeting is as follows:
1. Opening
2. Minutes of the 1st Annual General Meeting, which took place on the 14th February, 1981
3. General Report, I98I
4. Financial Report, I98I, and Budget, 1982
5. Election of new Committee members
6. Appointment of Cash Committee
7. Any other business
8. Departure of resigning Committee members
9. Closure of Meeting.
Explanatory note with reference to No.5: As you will have seen in our previous Newsletter, Mevrouw M.H.Steinweg-ten Horn has resigned from the Committee. Mevrouw S.G.Beek-Hobart and de Heer H. van Krieken will also be vacating their positions on the Committee as of the 20th March, 1982, due to personal reasons. In accordance with Article 8 of the Statutes, both the members as well as the Committee can propose candidates to occupy the positions which are being vacated. Members who intend to propose a candidate should present such candidacy, in written form, at least ten days before the Meeting, to be delivered to the above-mentioned address in Oosterbeek. This recommendation should be accompanied by the signature of at least ten members, and the candidate must be a member of the Society and also be of age. The Committee submits the following candidates (in alphabetical order):
1. de Heer R.Fennema Benedendorpsweg 150, 6862 WP Oosterbeek
2. Mevrouw J.M. de Langen Sportweg 2, Postbus 69, 3870 CB Hoevelaken
3- de Heer J.Smits Boulevard 9> 6881 HN Velp.
Half-an-hour before the Meeting commences, the members may peruse the:
a. Minutes of the 1st Annual General Membership Meeting of the 14th February, I98I;
b. The Report of the Cash Committee (by Messrs. Kardol and Smits).
After the Meeting, a film will be shown (see hereunder).
On behalf of the Committee,
R.P.G.A.Voskuil.

Presentation of the film “De Bevrijding van Nederland” (The Liberation of the Netherlands) which will take place on the 20th March, 1982, immediately after the Annual General Membership Meeting.
After the failure of the Battle of Arnhem in September 1944, the Dutch front in the area around the major rivers became rather still. The southern part of the Netherlands was liberated, but the remainder of the country remained occupied. Finally, at the end of March, 1945, the long-awaited Allied offensive started. The opening attack in the Netherlands was carried out by the First Canadian Army Corps.
Cameramen assigned to the Canadian Army filmed the advance and the
place in and around the various towns in the central, ea April Even
country. There are also a few shots of Arnhem during.the battlerath,e 17th April. : Even the dropping of food-supplies for the starving “Vesting Holland (the German fortified western part of the Netherlands) and the Capitulation. negotiations in Hotel De Wereld in Wageningen have been filmed. We are also able to witness into the western part of the Netherlands and the consequent Liberation festivities which took place. The last part of the film is dedicated to the preliminary efforts at getting the battered country back into some sort of liveable state., and the rounding-up and transportation of the German prisoners-of-war. “De Bevnjding van Nederland ., which has a Dutch commentary, will be shown by Ir. J.Voskuil, who received a copy of this film shortly after the war.

Annual Report for 1981.
The number of members of the Society of Friends of the Airborne Museum increased sub¬stantially during I98I: to our great satisfaction, as of the 31st December, 1981, we had 374 members both at home and abroad (last year: 234 members).
The 1st Annual General Membership Meeting, held on the 14th February, I98I, was attended by a gratifyingly large number of members: 96 in all, including our representative in Great Britain, Mr.A.Maynard, M.B.E.
Both the Annual and Financial Reports for I98O were approved, without comments, and adopted.
A permanent Committee was chosen to replace the Interim-Committee which was formed when the Society came into being. The permanent Committee chosen was as follows:
de Heer H. van Krieken, Chairman
de Heer J.A.Eykelhoff, Vice-Chairman
Mevrouw S.G.Beek-Hobart, 1st Secretary
Mevrouw M.H.Steinweg-ten Horn, 2nd Secretary x)
de Heer H.A.Hendriks, Treasurer
Mevrouw J.Smit-Duchateau, Membership-Administration
de Heer Drs.R.P.G.A.Voskuil, Editor of Newsletters and Afternoon Topics.
x) To our regret, Mevrouw Steinweg has resigned from her position.
Major W.J.M.Duyts, adviser to the Society on behalf of the Airborne Museum Foundation, assists the Committee in word and deed.
Messrs. J.Kardol and J.Smits were appointed members of the Cash Committee.
The members present showed their interest in the well-being of the Society by the presentation of gifts and by their lively participation in the open discussion at the end of the Meeting, for which the Chairman expressed his appreciation.
The after-noon was rounded off by the presentation of a few authentic films about the Battle of Arnhem shown by de Heer A.Groeneweg, who also gave an accompanying commentary.
Three News-letters were sent out this year, both in English and Dutch.
Two afternoons with a special topic were organised and presented by de Heer Voskuil on the 13th June and the 28th November. De Heer Maassen’s cooperation dn-ring the afternoon with the topic “Verwoest Oosterbeek” (“Oosterbeek in Ruins”) was most appreciated.
With regard to the decision of.the Police Sport Association, Renkum, to refuse a British group permission to join the Airborne Walk accompanied by a couple of old howitzers, a letter was sent to the Board of the Police Sport Association, Renkum, protesting this decision.
On behalf of the Society, a contribution was made towards the “collection” for the purchase of a specially adapted car for Mr. Len Clark.
A British soldier who met with an accident during this period, was also given our attention in the Velp hospital. &
We are most grateful to Mr. A.Maynard, M.B.E., who is of such enormous support with regard to our British members, our thanks are also due to Major Duyts for his help as adviser, as well as to the Airborne Museum Foundation for permittiC us to use the Museum for our Committee meetings. ng u TO use tn
And, above all, thanks go out to our members, both at home and abroad, for their immense interest, their gifts for the Museum collection and their monetary donations which help the Society in one of its objectives, which is “giving support to the Airborne Museum”.
S.G.Beek-Hobart. 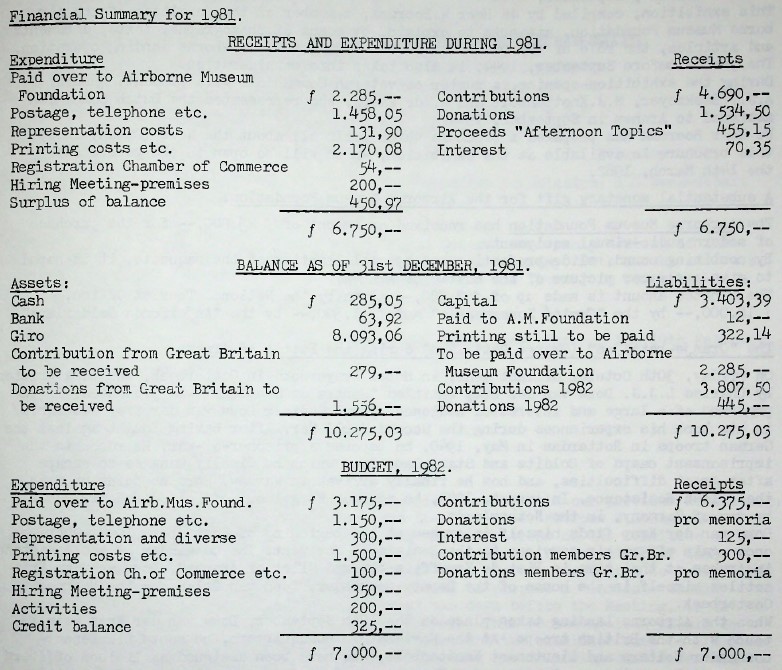 News from the Treasurer:
A great number of members have already paid their contributions for 1982 (often with an additional contribution!) for which I am most grateful. May I ask those members who have not yet paid their contribution, to do this as soon as possible. In so doing, will you please state clearly whether you desire an ordinary membership or a Family Card? I shall be much obliged for this cooperation. (This is of course only applicable to members residing within the Netherlands).
I would also like to thank our member, de Heer C.G. de Graaf, an Accountant in Oosterbeek, who has considerably simplified our financial administration by utilising a computer which he has set up for the Society completely free of costs.
H.Hendriks, Treasurer.

The Society now has a Technical Adviser.
In connection with the Society’s audio-visual activities, it has been decided that a Technical Adviser would be most welcome; our member, de Heer W.T.B. de Ruyter has agreed to accept this position.
Exhibition of the Dutch Commando’s activities during Operation “Market Garden”.
An exhibition was opened in the Airborne Museum on the 5th February last, entitled, “The Endeavours of No.2 (Dutch) Troop of the No.10 Allied Commando During Operation “Market Garden”, September, 1944″.
This exhibition, compiled by de Heer W.Boersma, a member of the Committee of the Air¬borne Museum Foundation, attempts to explain, by means of photographs, texts, documents and articles, the role of the Dutch Commando’s during this air-borne landing operation. The period before September, 1944, is also taken into consideration.
During the exhibition-opening, a number of veteran Commando’s were present: Messrs. A.J.P.Beekmeyer, M.J.Knottenbelt and W. de Waard, who represented the Dutch Commandos assigned to Arnhem in September, 1944.
De Heer Boersma has prepared a brochure which tells all about the No.2 (Dutch) Troop; this brochure is available at the exhibition, which will be open to the public until the 14th March, 1982.
A substantial monetary gift for the Airborne Museum Foundation.
The Airborne Museum Foundation has received an amount of f 25.000,— for the purchase of modern audio-visual equipment.
By combining sound, slide-projection and special lighting of the maquette, it is hoped to give a clearer picture of the Battle of Arnhem.
The donated amount is made up of f 3-500,— given by the National Tourist Office, f 10.000,— by the “Comite Zomerzegels” and f 11.500,— by the “Anjerfonds Gelderland”.

The “Oranje-bataljon” (Orange Battalion) during the Battle of Arnhem.On Friday, 30th October of last year, in Hotel Dreyeroord in Oosterbeek, the book written by Charles L.J.J. Douw van der Krap entitled “Contra de Swastika” was presented, in the presence of a large and interested audience. Naval Officer Douw van der Krap describes in his book his experiences during the Second World War. After having fought against the German troops in Rotterdam in May, 1940, he becomes a prisoner-of-war. He recounts the imprisonment camps of Colditz and Stanislau, from which he finally manages to escape after great difficulties, and how he finally arrives in Warsaw. Here he joins up with the Polish Resistance. In August, 1944, he manages to get out of Poland and arrives, by way of Germany, in the Netherlands.
Douw van der Krap finds himself in Arnhem at the beginning of September, 1944, where he once again offers his services to the Resistance Movement. The Commander of the Resistance in Arnhem at that time is Piet de Kruyff, nicknamed “Piet of Arnhem”. Douw van der Krap settles himself in the house of the Deputy-Commander, Toon van Dalen, on the Veerweg in Oosterbeek.
When the Airborne Landing takes place on the 17th September, Douw van der Krap gets in touch with the British troops. At the Hartenstein Headquarters, he meets Lieutenant- Commander Wolters and Lieutenant Knottenbelt, who have been assigned as liaison officers to the Airborne troops. Douw van der Krap is asked to form a small group of volunteers, made up of a number of civilians who had already offered their services to the British. This group, comprising about twenty civilians, became known as the “Oranje-Bataljon”; (one of the members of this group is de Heer Eykelhoff, who is at present the Vice- Chairman of our Society). In an unpretentious way, the Dutch civilians help during the following days in doing reconnaissance as well as gathering together the supplies which have been dropped. Relatively speaking, however, the British do not make much use of their help.
When, on Thursday 21st September, it starts becoming obvious that the operation is not going according to plan, the volunteer-group is disbanded.
After the battle, a somewhat disheartened Douw van der Krap makes his way towards Benne- kom. He accepts an offer by the local Resistance Movement to participate in operation Pegasus I and thereafter, together with a large group of Allied soldiers and a few Dutch, he manages to escape over the Rhine on the night of the 22nd October, 1944. And so, after having travelled around for almost four and a half years, he finally reaches liberated territory.
“Contra de Swastika” is published by Van Holkema & Warendorf in Bussum; the book contains 320 pages and costs f 39,50. This book has not yet been translated.
R.P.G.A.Voskuil.