Our Society’s Second Annual General Membership Meeting took place on the 20th March, 1982, in the Concert-Hall in Oosterbeek; 99 of our members were present.

Mr.A.Maynard M.B.E. was also present on this occasion. The Chairman, Mr.H.van Krieken, was unable to attend and the meeting was thus opened by the Vice-Chairman, Mr.J.A.Eykelhoff. First and foremost, the General Report for 1981, the Financial Report for 1981 and the Budget for 1982 were considered. This was followed by the election of the new Committee members as a consequence of the resignation of Mr.H. van Krieken and Mrs.S.G.Beek-Hobart. Mrs.M.H.Steinweg-ten Horn had already presented her resignation in December 1981.

The three candidates proposed by the Committee were introduced to the members and since no other candidates were presented, they were nominated to the Committee with no further need to vote. Since then, the duties within the Committee have been established and are as follows: Mr.J.Smits, Chairman; Mr.J.A.Eykelhoff, Vice- Chairman; Mrs.J.M. de Langen, Secretary; Mr.H.A.Hendriks, 1st Treasurer;

Mr.R.Fennema, 2nd Treasurer; Mrs.J.Smit-Duchateau, member; Mr.R.P.G.A.Voskuil, member. The Vice-Chairman expressed his appreciation to the resigning members for their considerable contribution towards the Society of Friends.

Then Mr.W.T.B. de Ruyter, who will give the Society technical advice, was introduced to the members present.

In an open discussion thereafter, the members had a great deal of suggestions, many of which have already been discussed within the Committee. Any questions directly concerning the Museum were answered by Major Duyts.

Finally, in closing the Meeting, the Vice-Chairman thanked all those present for their enthusiastic participation and invited all to view the film which had been previously announced in the Committee’s A.G.M. invitation.

A “special afternoon” dedicated to the fighting which took place in Oosterbeek.

On the 26th June, a “special afternoon” will be organised dedicated to the fighting which took place in Oosterbeek during the Battle of Arnhem and concentrated around Hartenstein and the western side of the “perimeter”. This “perimeter” was the bridge-head (in the shape of a horseshoe) held by the British in Oosterbeek and which they continued to defend against the Germans until the very end of the Battle. With the help of maps and aerial and ground photographs from 1944, an effort will be made during the walk which will take place to give an impression of the fighting as it raged in this part of Oosterbeek.

Any members wishing to participate in this afternoon are kindly reques e o su mi / 5.- to the Treasurer. For our British members who might happen to be in this area on the date mentioned, such payment can be effected in the office.

What happens to the Museum’s acquisitions?

Various kinds of objects relating to the Battle of Arnhem, as well as documents and photographs, are regularly received from civilians and war veterans. Such donations, whether received directly by the Museum or via our Society, are precisely registered together with the name of the person making the donation or the loan. Up until now, the donator was either thanked verbally or in written form. In the near future, a new and permanent arrangement will come into effect; this will include a “Certifi- caat van Ontvangst” (“Certificate of Receipt”) extended by the Airborne Museum. Some of the objects donated are exhibited first of all in the show-case in the reception room, alongside the maquette. Thereafter, space is found in the exhibition area or they are integrated in the archives or carefully stored. If necessary, objects are first of all cleaned, restored and preserved.

We regret that it is impossible to mention in the News-letter all the donations received; inevitably a choice has to be made.

The Records Department of the Municipality of Arnhem gives Aerial Photo Mosaic.

The Airborne Museum has recently received a large mosaic made up of aerial photo­graphs taken of Arnhem and its surroundings; these photos were taken on the 12th September 1944 by a British reconnaissance ‘plane of the R.A.F. 541 Squadron.

This mosaic, which is now permanently exhibited in the hallway of the upper floor of the Museum, was prepared by the Records Dept, of the Municipality of Arnhem for an exhibition held last year called, “Arnhem van Boven” (“Arnhem from the Air”).

Some time ago, the Museum received two bottles of blood plasma which were left behind after the Battle of Arnhem in a house in Oosterbeek where wounded British soldiers had been attended to. Unfortunately the rubber tube and needle belonging to the bottles were missing. Fellow-workers of the Museum got in touch with hospitals and doctors in the hope that such an authentic tube could be found; but to no avail. When this problem was discussed with your Editor, he suddenly remembered that some-” thing resembling the long sought-after objects, had been seen somewhere in his attic. After some hunting around, a tube with fitting needle of the type sought, was discovered. The tube was even complete with glass-holder and filter, as well as the fitted cork for the plasma bottle. It is needless to say that this souvenir has now been removed from your Editor’s attic to the Airborne Museum collection!

The donation of uniform coats.

Two uniform coats have been donated to the Museum by Mrs. B.Breman-Peters from Benedendorp in Oosterbeek. Both coats ones belonged to a soMier and the other belonging to a lieutenant of the Royal Artillery – are in their original and complete state with all their badges.

A significant gift from the Glider Pilot Regimental Association

The British veteran Glider Pilot Regimental Association has donated 500.- to our Society, for which we are extremely grateful. 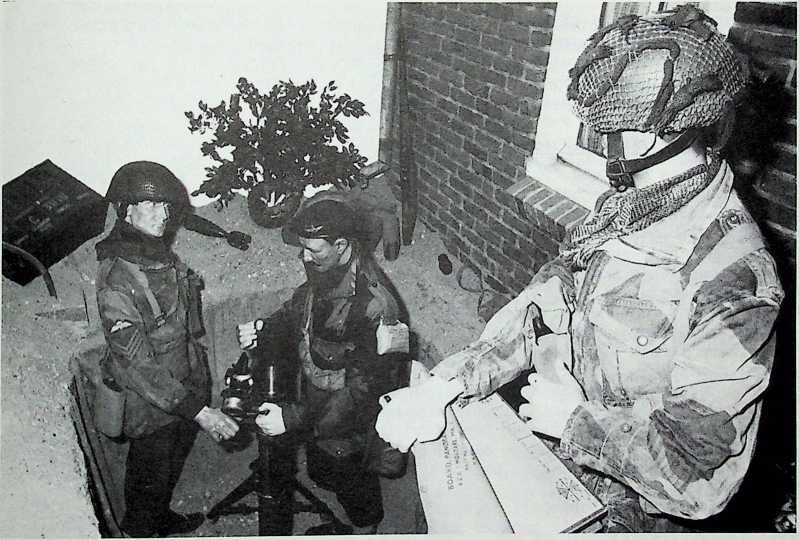 The 3 inch mortar in the cellars of Hartenstein
(photo: B. de Reus)

The diary of a British parachute doctor is published.

A number of books have already been published about the organisation of the British Medical Service and the care for the wounded during the Battle of Arnhem. A short while ago, a new title appeared, “Arnhem Doctor” written by Stuart Mawson. Mawson was the battalion doctor of the 11th Parachute Battalion, which formed part of the 4th Parachute Brigade dropped onto Ginkel Heath on the 18th September 1944. Even though Mawson mentions no names of streets or roads, his descriptions of places and situations are so very clear that we can follow him pretty easily. At the rear of the 11th Battalion, he and his medical personnel march from the Ginkel Heath through Wolfheze to Oosterbeek via the Utrechtseweg, where they arrive in the evening of the 18th September. They continue their march along the Benedendorpsweg in the direction of Arnhem, and having passed the viaduct of Oosterbeek-Laag Station, they overnight in a garden situated on the Klingelbeekse Weg. Early in the morning of Tuesday, 19th September, the march is continued to nearby the Hulkesteinse Weg in Arnhem. The remainder of the 11th Battalion has by then become involved in heavy fighting at Onderlangs-Bovenover and the medical section, with Mawson, utilise the garage of a house onthe Klingelbeekse Weg as a first-aid post. When the situation becomes untenable, Mawson continues his work in a near-by shed, a few hundred metres westward. Here he first meets the Dutch nurse who has such an important role in the rest of the narrative.

Later, on that same 19th September, all the wounded and the medical personnel are evacuated from the shed to Hotel Schoonoord in Oosterbeek, which.was then being used as a hospital. By then, Mawson is definitely divided from his own attalion. As the Battle of Arnhem continues, he remains assigned to the medical staff of

Whilst the battle rages in full force, his description of the life and work in that hospital is extremely penetrating. But even more so, it is the way in which he analyses his own emotions as well as those of others, which makes the book so very special. Moreover, Mawson has the great gift of being able to put his experiences and emotions into words in a most fascinating and compelling manner.

His story finishes on the 23rd September, when Schoonoord falls into German hands, and he and all the wounded are taken into captivity.

“Arnhem Doctor”, which is published by Orbis in London, is imported by Keesing BV in Amsterdam and costs f 43-90. There is no Dutch translation of this book.

A new book about the British “Airborne” generals.

“The Silken Canopy” written by the British Major Victor Dover, appeared in 1979 and described the author’s experiences as a parachutist during the Second World War. Victor Dover has now written a second book entitled “The Sky Generals” which is about the generals who commanded the British airborne troops during this period. He describes briefly their youthful periods, their careers and their characters and then continues to study their roles in the building up of the different brigades and divisions as well as the airborne landing operations which took place in enemy territory.

General Gale is the first to be described; he was the first to be given command of the 1st Parachute Brigade which was established on the 15th September, 1942. Gale also led the 6th Airborne Division during the invasion of Normandy in 1944.

A great deal of attention is given to Browning, who is considered the “father” of the British airborne troops. Less well-known generals, such as Hopkinson and Down who were Urquhart’s predecessors in commanding the 1st Airborne Division, are also mentioned. In the chapter entitled “The Magnificent Disaster”, the roles of Urquhart and Sosabowski during the Battle of Arnhem are studied.

General Bols is the last of the “Airborne” generals to be discussed; Bols led the 6th Airborne Division during the attack over the Rhine in March, 1945.

The author also discusses, in a separate chapter, General Wingate who made extensive use of gliders in 1944 to get soldiers and material far behind the Japanese lines in Burma.

Although the strength of the British airborne landing troops has been gradually decreased, they have nevertheless played very important parts in a variety of local conflicts. They helped to maintain order in Palestine between 1945 and 1949 and also participated in the attack on the Suez Canal in 1956. These affairs are also discussed by the author.

“The Sky Generals” was published in 1981 by Cassell in London, and was imported to the Netherlands by Nilsson 8c Lamm BV. The price of this English book is / 44.35.

The following News-letter will appear at the end of August and will contain a resume of the September Remembrance programme in Oosterbeek.