NEWS-LETTER No. 7. AUGUST 1982
Editor: Drs.R.P.G.A.Voskuil Dutch-English translation: Drs.A.Groeneweg
Dear Friends,
It is a pleasant thought that our Society is gradually becoming better known. For the first time a delegation of the committee attended a meeting held to coordinate the activities during the Airborne March and the September pilgrimage. The other participants at this meeting were the Renkum Police Sports Association, the Lest We Forget Foundation, the Poland-Driel Committee and the Airborne Museum Foundation. Elsewhere in this News-letter the programme for the September Remembrance Week-end is printed.
Although the time for making preparations is rather short, we are trying to propagate our existence during the Airborne March on the 4th September.
This is what we in fact did when we literally went out in the streets on the 26th June during a walking tour along the western side of the perimeter in Oosterbeek. The interest shown by our members was overwhelming. We counted more than 120 members, from all parts of the country. The enormous attendance, the cooperation of the Trustees, the Director and staff of the Airborne Museum and the oral and visual explanation by Messrs Groeneweg, Van Roekel and Voskuil together with Arnhem-veterans Ken Scott- Phillips and Reg Whotton, all this resulted in a very successful excursion. Many thanks to all concerned!
In view of the many positive reactions the committee considers the possibility of organizing other excursions along the same line. Your suggestions are welcome. Finally we should like to ask those members who took photographs during the tour to present a copy for our archives. The Hon. Secretary will be pleased to receive them. With many thanks for your cooperation,
J.Smits, president.

In Memoriam Henk Aalbers.
On 7th July Mr.H.G.Aalbers of Oosterbeek suddenly died at the age of 64.
From the beginning Henk Aalbers was involved in the annual Airborne Memorial Services. He was deeply interested in everything connected with the Battle of Arnhem and he was an enthusiastic member of our Society.
We convey our sympathy to his wife, children and family.
From the administration.
Perhaps superfluously, members are reminded that the official year of our Society concurs with the calendar year. Cancellations of membership should be received not later than 1st December.
Programme of the 38th Anniversary of the Battle of Arnhem.
The following Programme was received from the Lest We Forget Foundation.
Thursday 16th September: At approx. 20.00 hrs.: Arrival of British and Polish pi g (place of arrival: Town Hall, Oosterbeek).
Friday 17th September: At 18.00 hrs.: Annual General Meeting of the Arnhem Veterans Club, in the Concert Hall, Oosterbeek, followed by the Reunion of the Arnhem e (both Meeting and Reunion for members of the Arnhem Veterans Club only).
Saturday 18th September: At 9.00 hrs.: Assembling at the Town Hall, Arnhem, for wreath laying at the John Frost Memorial. .
At 10.00 hrs.: Official Reception at the Municipality of Arnhem. (Vehicles can be parked in the Market Square opposite the Town Hall). The Reception will end in time to enable the guests to attend
at 12.00 hrs. : the Parachute Descent onto the Ginkel Heath by 10th Bn Parachute Regt. After the Drop, there will be a short Service of Remembrance at the Monument on the Ginkel Heath.
At 15.00 hrs.: Wreath Laying at the Polish Monument at Driel.
At 19-45 hrs.: Tattoo on the Market Square, Oosterbeek.
At 21.00 his.: Social Evening and Dancing for all the British visitors (and their hosts) in the Concert Hall, Oosterbeek.
Sunday 19th September: At 8.30 hrs.: Holy Communion Service, Old Church, Oosterbeek.
At 9.3O hrs.: R.C. Mass, R.C. Church, Utrechtseweg, Oosterbeek.
At 11.00 hrs.: The Memorial Service at the Airborne Cemetery, Oosterbeek.
At 14.00 hrs.: The Boat-trip on the river Rhine, until 17.00 hrs.
Monday 20th September: Departure Times for the British and Polish visitors.

Miniature Horsa Gliders.
A glass case in ons of the ground floor rooms of the Airborne Museum contains three large models of Horsa Gliders.
For a number of years two enthusiastic Dutch model builders, Messrs B.Belonje and A. van Pelt, spent almost all of their spare time collecting data about this type of glider and building the models.
Relatively little information about this type of glider is available. Not a single Horsa has been completely preserved, although some 2000 of them were built during the Second World War. British museums count three cockpits and one incomplete fuselage among their exhibits.
With the help of photographs, drawings and instruction books Messrs Belonje and Van Pelt have succeeded in reconstructing the gliders to the smallest detail. The perspex models are on a scale of 1 : 32. Wooden master copies of the cockpit, fuselage, tail and wings were made. Heated perspex was then pressed around the master pieces. A frame of spars and longerons was then fitted into the models. The interior of the cockpit was constructed according to the Pilot’s Manual. Apart from the instrument panel it contains three compressed air bottles for the air brakes a TR radio, a battery for the lamps and a rack for signal cartridges.
The position of the models in the glass case is not arbitrary but was based on aerial and ground photographs taken on 17th and 19th September 1944-, on the landing zones near Wolfheze. It shows the unloading of three Horsa gliders, carrying men and material of 1st Airlanding Brigade. y
The Horsa with the fixed tail carried troops sitting on opposite benches. On landing, they left the glider through doors aft of the wing.
The tail sections of the other Horsas have been removed. Runners have been slinned out and jeeps, a trailer and a six-pounder anti tank gun are driven out of the gilders.
Here, too, much attention has been given to detail
The words of praise from many visitors to the Muse™, among whom a number of-ex-glider pilots, are proof that the two modellers have delivered work, for which the Airborne Museum owes them sincere gratitude.

The Horsas, built by Belonje and Van Pelt, are hardly distinguishable from the real thing, as the photograph shows. The models were put out in the open and photographed in close up. 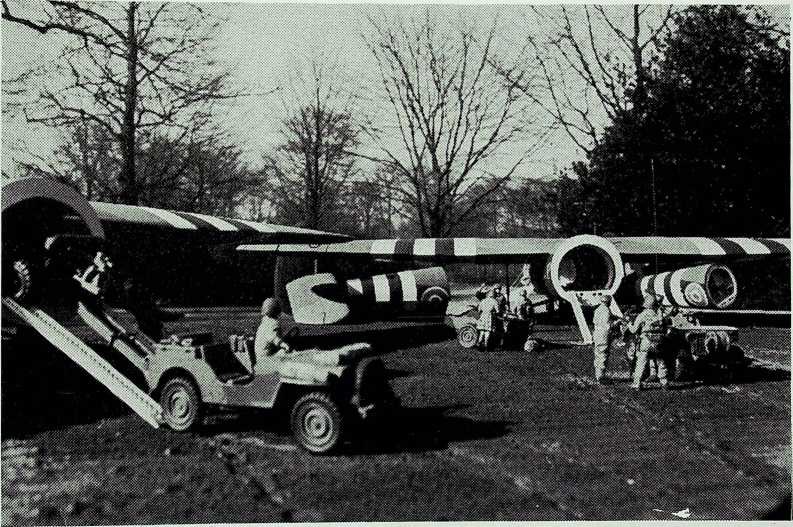 (Photograph: B. de Reus)
The Airborne Museum during the September Pilgrimage.
The Museum, which is normally open from 11.00 – 17.00 hours, will be open until 21.00 hrs. on Thursday 16th and Friday 17th September.

The Old Church at Oosterbeek.
The Old Church on the Benedendorpsweg at Oosterbeek is open to visitors from June to October on Tuesday and Thursday from 14,00 – 17.00 hrs.
If you wish to visit the Church at other times, please contact:
the Parish Office, Utrechtseweg 218, Oosterbeek, telephone (085) – 333094 or
Mr. Vergunst, Benedendorpsweg 127, Oosterbeek, telephone (O85) – 333728, or Mr. Van Deventer, Benedendorpsweg 131, Oosterbeek, telephone (O85) – 332122.
Brig, Mackenzie presents Cap Badge.
Brig. Charles Mackenzie, who was GSO I (Ops) to General Urquhart during the Battle of Arnhem, has presented his cap badge to the Airborne Museum. Brig., at that time Lieut- Col. Mackenzie wore the badge of his original regiment, The Queen’s Own Cameron Highlanders, during the September days in 1944.
The badge is on view in the diorama of General Urquhart’s H.Q. in the cellar of the Airborne Museum.
Addition to the Collection of Radio Sets,
Mr. C.W.Weimar of Zeist has presented a number of radio sets from the Second World War. This important collection consists of two British receiver-transmitters^type 19, two receiver-transmitters type 38, an R-109 receiver and a German “Tornister receiver. All sets are complete with spare parts and instruction notes and are in perfect order.
Another gift of a Plasma Set.

In the last News-letter mention was made of the donation of two bottles of blood plasma, complete with tube.
Mr. J. Pol of Arnhem has now presented to the Museum a metal box containing a bottle of dehydrated blood plasma, a bottle of sterilized water and a complete set of tubes. The rubber tubes and the needles are still in their original wrappings.
This important acquisition will also be on display in the diorama of the first aid post in the cellar of the Museum.
Gift for the improvement of the Wheelchair Lift.
The (Dutch) Committee for Summer Postage Stamps has allocated the sum of Dfl. 20.000.- for the improvement of one of the wheelchair lifts of the Museum. The location of the lift at the front of the Museum has proved to be difficult. It has been decided to install a new wheelchair lift at the back of the Museum near to the main entrance.

A New Airborne Museum in Normandy.
The Sixth Airborne Division landed in Normandy during the night of 6th June, 1944, east of Caen. The division formed part of the huge Allied invasion force that initiated the liberation of the Continent of Europe. One of the tasks allotted to the Airborne Division was the capture of some heavily defended concrete fortifications near the village of Merville. The casemats, which presumably enclosed four 150 mm guns, were a serious threat to the British and Canadian troops that would land on the beach west of Ouistreham in the morning of June 6th. 9 Para Bn, commanded by Lieut.Col. Terence Otway, was ordered to destroy the Battery.
The attack, however, was made in quite a different manner than planned. Only 150 men of the 750 parachutists reached their rendez-vous and practically all heavy weapons and equipment were lost.
In spite of these disasters Otway succeeded in capturing the battery. The guns turned out to be of the 75 mm calibre and would have endangered the landings on the beach much less
The story of this operation is told in detail in a new book by John Golley, entitled “The Big Drop”, published by Jane’s Publishing Company, London, at £ 8.95.
Copies were presented to veterans of the 9 Para Bn on 5th June during the opening ceremony of a new museum in one of the big casemats of the battery near Merville. The museum shows the preparations for the battle and the course of the battle.
We hope this new Airborne Museum will get the attention it deserves and that it will soon become a well-visited reminder of this episode of the D-day landings.
The News-letter.
News-letter No. 8 will appear in November.
R.P.G.A.Voskuil.