As a small gaggle of volunteers watched with mixed emotions, the world’s only complete Horsa assault glider left Shropshire on its final journey, destined for Holland.  The full-sized replica of the Second World War troop-carrying glider is being transported on low loaders from RAF Cosford to Holland.

Having failed to find a permanent home in Britain, the full-sized replica of the Second World War troop-carrying glider was transported on low loaders from RAF Cosford, where it had been in store in an old hangar for five years, with its future uncertain.

But now thanks to Dutch enthusiast Richard Westmaas, it will at last go on public display as part of events in Holland to mark September’s 75th anniversary of the epic Arnhem operation, in which Horsa gliders played a leading part. Afterwards the massive wooden glider will go on permanent display in a Dutch museum. 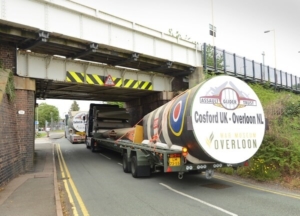 “It’s great, fantastic,” said Shrewsbury’s Richard Head, of the Assault Glider Trust, the charity which toiled for more than 10 years to create from scratch the non-flying replica as a tribute to the exploits of the airborne forces. “It’s quite poignant that it’s going across the Channel back to Arnhem, its spiritual home. It’s a damn shame no museum came up with the wherewithal to take it and keep it in England to exhibit.” Another of the trust’s team, Mrs Linda Ratcliffe, of Whitchurch, said: “It’s like saying goodbye to an old friend.”

She had a particular emotional connection because her father, Stanley Bridges, was part of the airborne forces on D-Day, although his Horsa never made it as the tow rope broke and it landed in England. Instead he went over by boat, and was soon injured by a stick grenade. However he recovered to take part in Operation Varsity, the glider-borne crossing of the Rhine in 1945. “I think he lost half of his men on landing.” 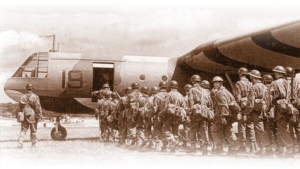 Paratroopers boarding a Horsa Glider in 1942

Linda added: “I’m very disappointed the glider was not taken under the wing somewhere in England.  Volunteers who worked on the glider at RAF Shawbury had hoped it would go on public display, perhaps at the RAF Museum at Cosford. However, the museum would not take it – according to Richard, because it did not take replicas, although the museum said at the time it did not have the space.

Richard Westermaas, the mastermind behind the move to The Netherlands, is an enthusiast who had toyed with the idea of building a Horsa glider for the 75th anniversary commemorations of Operation Market Garden, the Arnhem operation. He realised it was far too big a project, and then looking online discovered there was already the Shropshire-built Horsa glider available off the shelf. “I think we are bringing it home,” said Richard Westmaas who is organising the project. “The Dutch people are very enthusiastic. That’s why I got amazing support.” 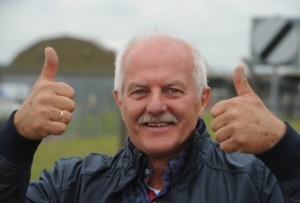 He said the glider would be displayed for 19 days on a grassed area opposite the famous Hartenstein Hotel, which was the British headquarters during the battle and is now a museum. Richard expects tens of thousands of visitors to see it. 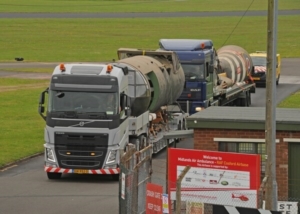 Afterwards it will move to the largest war museum in the Netherlands, at Overloon. With the wings having started their journey earlier this week, Wednesday saw the fuselage, painted with D-Day invasion stripes, leave Cosford. Careful measurements were taken to ensure the Cosford railway bridge did not prove “a bridge too low” for the load, and it squeezed under successfully before heading to the A41, M54, and ultimately to the port of Hull. Several Shropshire airfields were centres for wartime Horsa glider training, and RAF Cosford itself played its part in the story, as many Horsas were assembled there.

Cosford’s last Horsas are believed to have been dragged out and burned on the airfield in 1954.