Gen Sir Brian Horrocks died in 1985 but, for reasons unknown, his ashes remained with the undertaker in Chichester.  RHQ of the PWRR was contacted by the undertaker in 2018 regarding this situation and, after a long search, his grandchildren were recently tracked down (their mother had predeceased him).  Arrangements have now been made to bury the ashes at the Middlesex Regiment (Duke of Cambridge’s Own) Garrison Church in Mill Hill close to brother officers and a set of Middlesex Regiment Colours that are buried nearby.   The service will take place at 1400 hrs 16 May (as a significant date in Gen Sir Brian’s life) and, in addition to senior officers from the regiment, will include Black Rod and a former Black Rod in the congregation.

For the younger generation, Gen Sir Brian was played by Edward Fox as Commander 30 Corps in the film a Bridge Too far.  As well as representing his country in the 1924 Olympics (Modern Pentathlon), he became Black Rod after leaving the Army and was for many years a commentator on documentaries about the First and Second World Wars – most notably in the series ‘World at War’ 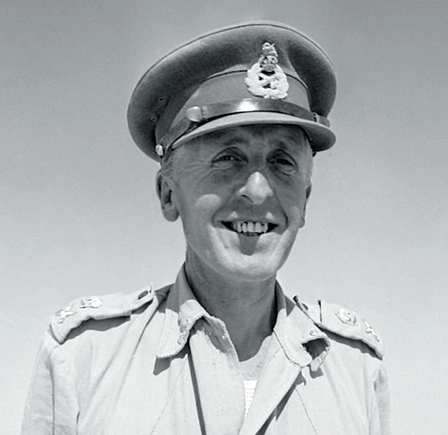 (Thank you to David Locke for bringing this to our attention)