Many ‘accounts’ of the 1st Airlanding Anti-tank Battery R.A. have been recorded in our previous books associated with Operation Market Garden and particularly of the actions of the guns of the Anti-Tank Battery from the 17th to 25th September 1944. Through intensive research by the authors a comprehensive detail of the actions and positions of each individual Battery gun or Troop section, along with a time frame for these actions was compiled or is in the progress of being written.

The Battery accounts were obtained from 1976 up to 2005, examined and interpreted by the author(s) onto archive maps of the operations the Battery was involved in, including France, Sicily and the Arnhem area, with the aid of Philip Reinders. Each gun location and movement were plotted, and accounts of actions were recorded in full in the manuscript ‘White Lanyards’ in 2005. It was found that many of the gun positions and the time frame of actions they were involved in conflicted with previously recorded and published accounts. 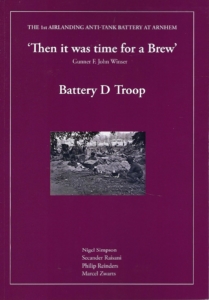 During April 2014 these accounts and gun positions were then extrapolated within a simulation program adapted by Secander Raisani, for Operation Market-Garden. In this way the author was able to check the gun positions to confirm if the gun positions recorded in ’White Lanyards’ were feasible and accurate. This was particularly completed for the Arnhem Bridge perimeter. The results were astonishing to say the least. The reader of this booklet will therefore be able to draw their own decisive conclusions based on the evidence presented.